brought to you by Animal Cracker Conspiracy 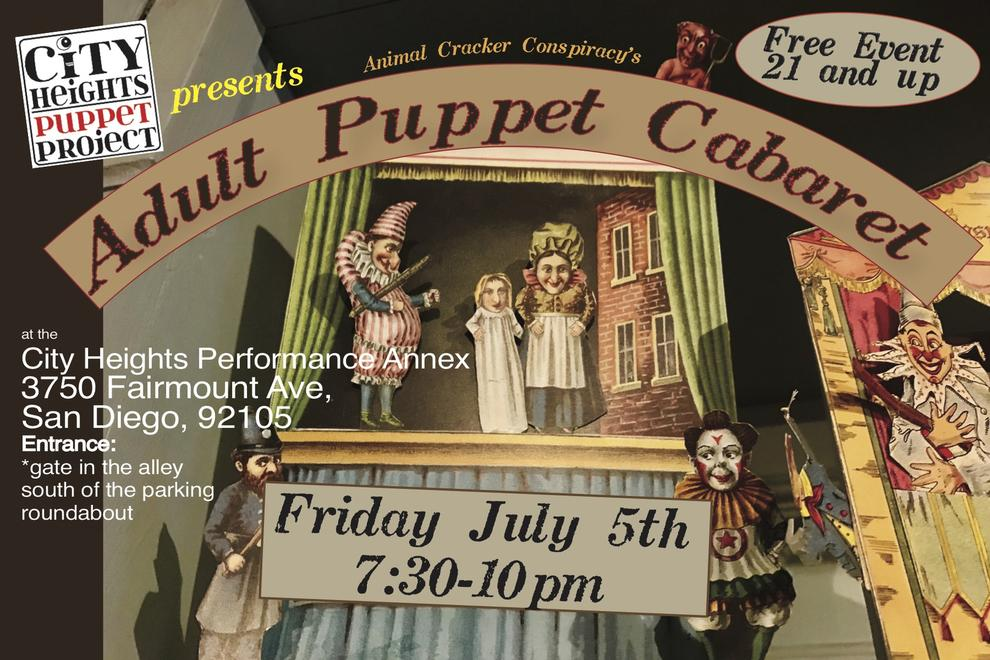 Come one come all (21 and up thank you!!) to the upcoming Adult Puppet Cabaret-A special “FREE” edition of the Adult Puppet Cabaret in collaboration with the City Heights Puppet Project! Friday July 5th 7:30-10pm. Short form puppet theater, libations, music and more! Performances TBA next week! Special Screening of a curated selection of Hand Made Puppet Dreams Short Films selected by Alex U. Griffin. 21+ only

A person who has stopped growing at both ends and is now growing in the middle.

an inanimate object, often resembling some type of human, animal or mythical figure, that is animated or manipulated by a human called a puppeteer. The puppeteer uses movements of her hands, arms, or control devices such as rods or strings to move the body, head, limbs, and in some cases the mouth and eyes of the puppet. The puppeteer often speaks in the voice of the character of the puppet, and then synchronizes the movements of the puppet's mouth with this spoken part. The actions, gestures and spoken parts acted out by the puppeteer with the puppet are typically used in storytelling. Puppetry is a very ancient form of theatre which dates back to the 5th century BC in Ancient Greece. There are many different varieties of puppets, and they are made of a wide range of materials, depending on their form and intended use. They can be extremely complex or very simple in their construction.

Cabaret has its origins in 19th-century Paris, at Le Chat Noir, where musicians and poets performed in a casual atmosphere where people felt free to eat and drink. The word and descriptions of cabaret are derived from the French word meaning "wine cellar" to describe the small room where this form of entertainment was born. Over time, European cabaret evolved into a number of forms, including comedy, burlesque and sociopolitical satire.In America, cabaret was performed in speakeasies and other intimate nightclub venues and evolved into a much more jazz-infused style of performance. New York City nightclubs, like the Cafe Carlyle, feature singers associated with music from a genre known as the Great American Songbook.Today, cabaret is its own, identifiable art form, distinctive from musical theatre, nightclub singing, or a concert. The most essential elements of cabaret are simple: a performer in a small room with an audience at close range, seated around cozy tables, with the performer mere feet from the audience.